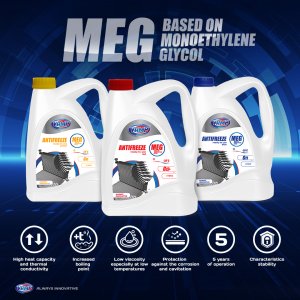 Engine is one of the most important car units, its heart. Its good state depends on the no-failure operation of both fuel, lubricant supply system and cooling system. And it is not so easy to choose the suitable antifreeze on the back of modern market. Taking into account the fact that cooling system is one of the most vulnerable units of the car, it is worth spending time choosing reliable coolant.

THE COLOUR OF THE ANTIFREEZE DOES NOT MATTER

The most reasonable criterion when choosing antifreeze is its composition but not colour. The ethylene glycol-based coolants are very popular today. The quantity of ethylene glycol in the composition of the coolants is usually 52–64%, while the freezing point of the solutions ranges from -32°С down to -70°С.
Hydroglyceric solutions-based antifreezes differ from ethylene glycol-based ones in viscosity and thermal-physical properties. However, this does not mean that these products have bad operation properties. The issue is about the quality of the basic component — glycerine that can be absolutely different in performances depending on the origin. The manufacturers sometimes can use insufficiently refined glycerine which leads to corrosion increase. If the antifreeze consists of the high-quality refined glycerine, the coolant will perform the main task which lies in preventing engine overheating. Glycerine as well as ethylene glycol lowers the freezing point and does not lower – even theoretically rises – the boiling point.
We would like to bring to your attention the range of top-grade antifreezes and VAMP coolants based on best quality monoethylene glycol. First of all, ethylene glycol-based antifreezes provide good pumping ability through the cooling system, since it is a less viscous product. It is due to this property the necessary heat capacity and thermal conductivity are created, which ensure the proper heat removal from the engine cylinders. The freezing point plays an important role. A mixture of monoethylene glycol and water crystallizes at a below-freezing temperature of about 40°C. These substances do not freeze, but turn into a thick jelly-like mass thereby protecting the cylinders block and junction pipes of the cooling system from cracking and rupture which is their characteristic and useful feature. The antifreezes and VAMP coolants do not only protect engine from overheating but also provide reliable protection of metal parts against corrosion. The optimal engine temperature means the fuel economy.
VAMP products are created due to the hard work of company’s product engineers on developing composition and production methods. The products are manufactured using most advanced additives package that provide stability, reliable protection and highly efficient operation of the engine. Water glycol-based coolants are composed of various additive package preventing corrosion of copper, solder, cast iron, brass, steel and aluminium – all metals being in contact with them. Antifreezes and coolants are suitable for using in all types of liquid cooling systems of modern light vehicles, trucks and off-road vehicles. Our company possesses laboratory and production facilities for developing and producing low temperature coolants that allow making an assessment antifreeze quality change effectively.

These coolants are sure to belong to higher price range and are designed for the modern vehicles. Besides, the special colouring agent is added to antifreeze which facilitates the work of machine men at auto services companies. When testing the cooling system the bright fluorescent agent helps to determine the leak point especially with the use of ultraviolet lamp.
Coolants change their characteristics during operation: the reserve of alkalinity decreases, the tendency to foaming and the ability to cause corrosion of metals increases. It is impossible to determine the quality of coolant at home. That’s why when buying new antifreeze it is better to drain the used one and wash out the system correctly.

SOME ADVICE FOR THE RIGHT CHOICE

Glycol bases (monoethylene glycol, diethylene glycol, propylene glycol) are mixed with each other without consequences. However, mixing of water glycol solution with the hydroglyceric one is not desirable. Mixing of coolants with the different additive groups is not allowed.

There are a lot of coolants on the market today, the origin of which is practically unknown. That is why the possibility of buying a low-quality product is not excluded, and using it you can run into a number of problems. In order to somehow protect yourself from counterfeiting, try to be guided by at least basic signs: a high-quality coolant should be transparent, oily by-touch, and odourless. There is also a belief that the coolant colour affects its properties. It is not true. The coolant is colourless and is coloured only for the reason not to be drunk by mistake. And, finally, try, if possible, to use the litmus test paper and measure the degree of acidity. Original coolant usually has a pH within the range of 7-9, the indicator turns green. If it is a fake, the indicator will change colour to pink (too much acid) or blue (too much alkali). And it is best not to buy coolant in suspicious places and give preference to coolants from well-known manufacturers.